This week, I assisted Lila Abbate at Touro College in New York in a Bowel Course through Herman and Wallace. The BBPT pelvic floor experts–Stephanie Stamas, Corey SIlbert and Melissa Stendhal–also attended, along with over 40 others from the U.S. and Canada. 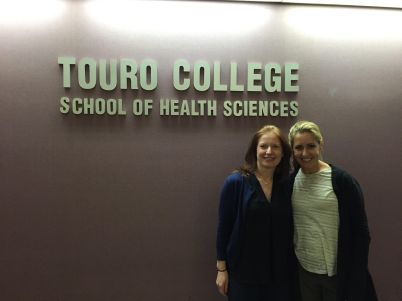 It’s exciting how the world of pelvic floor PT is advancing.  When I started only Holly Herman and Kathe Wallace were teaching separate classes and only one time per year.  Now there are over 100 classes taught between APTA Women’s Health and Herman and Wallace.

– none of the tests for PFMD replace palpation and findings with your expert finger
– the bowel is a slow learner and does not like change
– there’s a big link between the bowel and the nervous system.
-medications can effect bowel habits and the patient may have to adjust their lifestyle
– positioning on the toilet can help with the anorectal angle
– abdominal bracing can help
-the diaphragm assists with urination and defecation
-pelvic floor muscles are passive with defecation and abdominal muscles are active
– you need to set responsible expectations

Even two years after a surgery or traumatic injury, bowels are still sensitive. Take a good history and do a bowel diary to help with your differential diagnosis.  Is the patient drinking enough water, drinking too much coffee, too much alcohol and dehydrating their system? Are they eating too much fiber or taking too many laxatives? Do they have constipation or bowel leakage because of this?  Do they need to bulk their stool vs. add more water and soluble or insoluble fiber? Almost all patients who have had a bowel surgery have difficulty with dairy and fatty foods, so eliminating this from their diet can help. Doing an p to two yeelimination diet can help. Lila also discussed how you can have the patient eat corn and see how long it takes to pass as a precursor to the Sitz marker test.

Bowel issues can arise uI highly recommend this class and all of the Herman and Wallace and APTA Women’s Health classes to advance your learning in pelvic health. Also, for more information on nutrition for PTs, Jessica Drummond teaches and has a certification for PTs and nutrition.

This site uses Akismet to reduce spam. Learn how your comment data is processed.